I think it is only natural that the narrative voice is female, since I am a woman. At the same time, I must confess that I think it is simplistic to write from a masculine point of view: all great narrative models are masculine.:)      (2016-11-08) 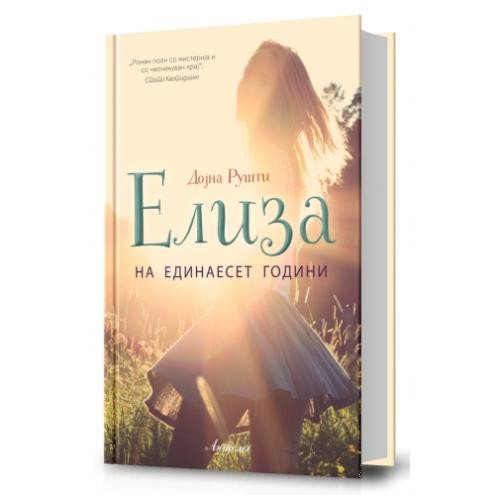 Ivana Vitanovska: Doina Ruști, you are a very famous author, who won a lot of prizes. A lot of people want to read your books on their mother tongue. Now, your book “Lizoanca at the Age of Eleven” has a translation on Macedonian language. How do you feel about every translation of your books on another language?

Doina Ruști: A translation basically represents another book, whose life I almost know nothing about. For the other versions of the novel I relied entirely of the translators. I’ve heard that the German version was highly praised. They changed the title in Spanish. I don’t know if that was for the better or not. And regarding this translation into Macedonian, the translator of the novel, Alexandra Kaitozis, deserves all the credit.

Ivana Vitanovska: In the book, you are writing about an 11 year old girl who is accused that she infected the whole village with syphilis. But, what exactly are you writing for? Maybe about the problems that people suffered in the past or about the secrets, the love, the crime and the values that have been forgotten?

Doina Ruști: We are living reverberating times. The world is falling apart under our eyes. I don’t think there’s anyone who hasn’t noticed this reality. For me, the story of this generic ending starts in a small village where people have lost respect for their fellow humans. Child abuse is nothing but a consequence. At the bottom of this evil we find however concepts innocent in semblance: extreme tolerance and a leniency towards severe actions. When a community chooses to turn the blind eye to minor injustice, the consequences steadily become a symbolic snowball, which amplified then turns into an avalanche.

Ivana Vitanovska: It is a real story. Where did you find out this story? Did someone retell you?

Doina Ruști: The novel Lizoanca is based on a true story, but within it I created a world that only belongs to me.

Ivana Vitanovska: Considering the fact that the story is in the past, do you want to escape in that period or you just retrieved to the real story?

Doina Ruști: My novel is trying to answer the question how did we end up here? That was my intention, at least.

Ivana Vitanovska: In almost every book of yours, the main character is a woman/girl. Why do you always choose to write in female voice? Are we going to read something from you in a male voice?

Doina Ruști: I think it is only natural that the narrative voice is female, since I am a woman. At the same time, I must confess that I think it is simplistic to write from a masculine point of view: all great narrative models are masculine.:)

Ivana Vitanovska: Do your books have any relation to your current situation in your life? Maybe if we read between the lines we can found out about your everyday life or the changes that you are experiencing?

Doina Ruști: There is no book out there that is not connected in some way to the author’s life. As for me, all my books have a part of me imbedded in them. Even the historical ones. In Lizoanca I built a world representing the Romanian village, as I know it, because I was myself born in a village on the Danube River’s shore, not far from Kozlodui. When I was 11, a terrible tragedy struck my family: my father was murdered. This age expanded for me. It now comprises my most atrocious experiences, where childhood and adulthood are interwoven. I never went through anything similar to the experiences my character faces, but I did endure the emotional and moral intensity of a small rural community.

Ivana Vitanovska: How do you imagine your ideal reader? Where is he/she coming from and how old is he/she?

Doina Ruști: I am fearful to think of a certain type of reader. I mostly guide myself by the idea that writing is more of a personal game. If it’s a good game, others want to play it. Of course, I want that among them to be people who share the same kind of emotions. But that is the fate of a book anyway: to flock together the birds of a feather.

Ivana Vitanovska: What are you reading at the moment? Who is your favorite author?

Doina Ruști: At the moment I am reading 18th century’s novels, which represent part of the research I’m doing for my next novel, which tells the story of a witch from the Age of Enlightenment, who is equally interested in the modern technology and mysticism.

I love Faulkner’s novels, I would reread at any time with just as great the excitement Celine (Death on credit, in fact), I epically feed on Michel Folco, J.M. Coetzee, Haruki Murakami. I enjoy Mo Yan’s narrative.

Ivana Vitanovska: What do you think about Macedonian literature? Have you read some piece written from a Macedonian author?

Doina Ruști: I am afraid I do not know much of it. In our country Dejan Dukovski is quite famous, as his Powder Keg flourished in the Bucharest theaters.

Ivana Vitanovska: On November 8th the book “Lizoanca at the Age of Eleven” will be presented in Skopje, Macedonia. Tell us something that will make us inquisitive about your book, and will make us to read it.

Doina Ruști: The book is structured on more chapters where various characters recall a certain event back from when they experienced the infamous age of 11 years old. I hope from the bottom of my heart that at the encounter with the readers in Skopje I will hear the stories of real people, disciples of the finest Balkan tradition, who might take advantage of the occasion and share with me their own tales related to this challenging age. Kisses! 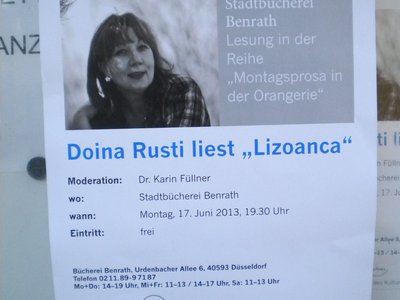 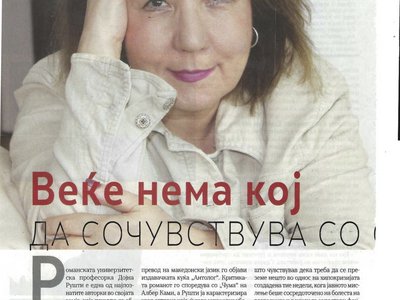