Scenes of love are not easy to write. Hypocritically, the young writer avoids, under the very pretentious pretext, that physical love should not be narrated. It is true that you can quickly become stupid, but that does not mean that carnal scenes should be excluded from the novel. They relate to the theme of the book, so they should not be read as independent texts. (2019-04-12)

I'm trying to look back over the amorous scenes in my books.

An episode of a tough realism appears in Lizoanca (2009).The theme of the novel asked for such a scene. I was supposed to write it

First he saw her shoes. She had a pair of red shoes, with beige heels, from imitation wood, which seemed drawn on her small, white soles. He would have recognized them even in a mound of shoes, particularly because they were on her feet, who were also unmistakable. He dropped down, to the root of the blackberry bush. Through the gnarled thorny branches the red shoes could be seen, under a man’s legs. He had his overalls’ trousers down at his ankles, fallen in wavy rings, so you could see his tense hips, going up and down in an alert effort, as if he was in race for life or death.

Cristel also dropped on his belly, curious and at the same time in shock. The man was Țuțu the truck driver. And underneath was his mother, with her skirt pulled up to her waist. It was the first time he saw two people getting it on and, until he had time to think about his discovery, he saw that there were actually three people. When the truck driver lifted his head once, he saw her too. Tori had her eyes closed, and near her forehead kneeled Greblă, Ionel Greblă’s old man, he too with his trousers down, stroking it, with a face full of suffering. He had seen old dicks before, especially held in hands, but never one so red, as if it had spent three days in a barrel of crushed grapes. His mother’s face, partially covered by the truck driver’s iron arm, the black hands squeezing a piece of raw flesh and the twisted branches of the blackberry bush, plunged into the coppery chest of October, had entered violently deep in his marrow. Like a postcard stuck inside a mirror frame. 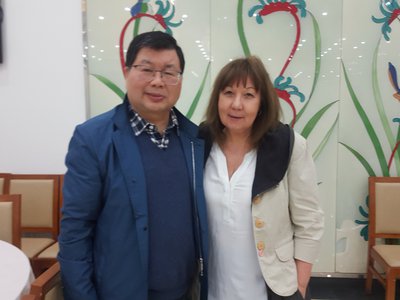 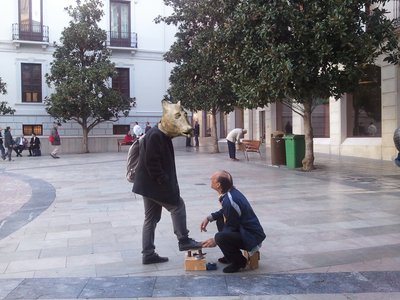