The Ghost in the Mill (Fantoma din moară)

The product of a powerful original prose writer, a rara avis in post communist Romanian literature.

The Ghost in the Mill

is a novel about Romanian Communism. The action centers on the story of a woman (Adela) in whose life occur a series of curious events, which are in fact related to the cruelty of a totalitarian regime. The people of Comosteni believe that a ghost lives in the deserted mill of the village, but as the action goes on we understand that their projections, hopes and fears are born under the pressure of the dictator ruling over that world.

The novel is composed of three seemingly unconnected tales:

I. The Secret Life of Adela Nicolescu

Present-day heroine Adela Nicolescu notices in the window of a bookshop a novel appearing to recount her own life. Consequently she attempts to discover a possible connection between the author of the novel and herself. Her investigations lead her to an internet blog (staphia.ro), where she rediscovers the text of the novel. However, this text is continuously morphing, with Adela’s thoughts, visions and revisions being added as if from nowhere. The life of this woman is marked by her secret relationship with a ghost she calls Max. Discovered in an abandoned mill, the ghost enters historical reality episodically at first. As social life succumbs to totalitarianism, it becomes all-pervasive, so very much so that in Adela’s eyes all people begin to take on Max’s features.

Doina Ruși's book presents a wide range of literary skills, which give the measure of resistance in the Romanian history of the 20th century.

The events succeed tempestuously, composing Adela's tumultuous biography. People around her die, disappear or take Max' appearance, while she becomes certain of the fact that all the events are dictated by the ghost in the deserted mill.

The second story is an objective, third-person account of life in the village of Adela’s childhood a few days after the explosion at Chernobyl in 1986. The Securitate, the militia, the schoolteacher, the secret-police informants, and the peasants all believe there is a soul in the mill, a place around which an entire mythology has sprung up with time. Most characters have their own ghost and live their own secret life, believing they are the only ones experiencing them. Nevertheless, there is a secret master of space (the local head of the secret police), who determines everything that happens: he alters destinies, knows the history of each individual and has access to the forbidden file in which almost all the tales about the ghost in the mill are recorded. The accounts about the hallucinating meetings in the mill, the spying and informing, the regular informative notes given to the Securitate are combined in a mixture making it hard to distinguish between truth and confabulation.

The local head of the secret police has the mill demolished, hoping the ghost entity would be thus destroyed. When the bulldozers roll into the structure of the mill, the soul of the building takes refuge in the souls of the people with whom it has long been connected. All these occur against the backdrop of some particular events, connected to a key-story: Lucica, a young schoolteacher is invited to a party at the militiaman’s place. She does not have the courage to decline this invitation which she finds dangerous. While the nuclear cloud spreads out over the village and the ghost diversifies its existence, Lucica is raped by the militiaman and his friends. Then, as people enjoy the phantoms or the magical events that take place around them, Lucica catastrophically lives the situation of her pregnancy. Advised by the militiaman, she resorts to abortion, but immediately afterwards, the same militiaman who was orchestrating her life arrests her and sends her to jail for infanticide. This schoolteacher’s destiny is related to the one of the village schoolteacher, Nicolescu, in the last part of the novel.

The novel ends with two chapters recounting two episodes in the life of the village schoolteacher, Ion Nicolescu, Adela’s great-grandfather. The first one is a luminous day in the year 1910, when this schoolteacher was young and involved in the Reform of the Romanian education system. He lives enthusiastically, but ignoring the small accidents occurring around him. He does not realize that the rebellion of one of his students, Andronache Pavel (an ancestor of Florian Pavel, the writer in the first part of the novel) will determine a series of negative changes.

The other one is set in November 1953, during the Stalinist era. Andronache Pavel is now the master of the village. He and a few of his comrades (characters of the second part of the novel) come home to see their former schoolteacher. Blaming Nicolescu for all his sufferance, according to the communist ideology, Andronache Pavel sets on fire the books in the teacher’s library. A beggar is also present among those gathered to see the fire and, during the last moments of his life, Nicolescu realizes that the beggar was his own son, returned form a Soviet prison camp.

It is in the account of these two days that the origin of the ghost in the mill is revealed. Both the schoolteacher’s enthusiasm and unhappiness remain at the foundation of the world, later nourishing the hopes of a world condemned to endure the communist oppression.

The Ghost in the Mill is an imaginative novel, in line with autobiographical fiction, in which magic realism and daily realism intertwine. [...] This mill, which is an axis mundi, the center, the hearth and the obsession of the village, where the character has no clue if he has met the angel or the devil, this mill is the place where a murder occurs, as at the dawn of all worlds: a certain Max, an epileptic, is killed by mistake [...] and everybody is obliged to keep silent, thus becoming accomplices in the murder. We have all been accomplices in what has defined and punished us. This is the parable of communism. A novel with substance, a sinewy prose which, I repeat, equals a part or several parts of Cărtărescu's Orbitor

Each of the three narratives complements the action of the other, explaining attitudes, conflicts and occurrences that have hitherto seemed inexplicable. In the communist world of The Ghost in the Mill there are no positive or negative, good or bad characters. Each contributes in his or her own way to the perpetuation of the wider prison camp that is totalitarian Romania, with survival as the only object of desire. That is why the novel has no main character, but rather describes a world subtly connected to the soul of a ruined history.

A Romanian event at the Frankfurt Book Fair: the German translation of the novel “The Ghost in the Mill” by Doina Rusti

This year, the Frankfurter Buchmesse Book Fair will be held from October 11 to 15 and will be opened by Angela Merkel and Emmanuel Macron.

The Fair will be attended by some of the best ranked writers of the day, such as Margaret Atwood, Dan Brown, Nicholas Sparks, Michel Houellebecq, Ken Follett, Cecilia Ahern, Paula Hawkins, Alain Mabanckou, Leila Slimani and many others. France, which is the guest country, announced that more than 180 writers will be present at the fair.

From a thematic point of view, this year’s edition of the oldest book fair has chosen the theme of the freedom of speech, especially referring to the Turkish writers.

One of the Frankfurter Buchmesse’s events is the launch of the novel “The Ghost in the Mill” (“Fantoma din moara” – e.n.) by Doina Rusti, recently published at Klak Verlag in Berlin (translated by Eva Ruth Wemme).

The launch of the book will be held on Saturday at 12.00, at Romania’s stand, as a debate related to the book, about history and guilt. Jan Cornelius and Jörg Becken, a historian and publisher from Berlin, will be invited together with Doina Rusti. (more)

The novel expounds my opinion on the retroactive punishment of crimes. I do not believe in the judgments made many years later. I do not believe in revenge. Communism was a complex terror. A kind of ghost hidden in the ruins of a mill, madeing mad people through confusion, debauchery, cruelty. Transforming normal people into monsters can not be repaired by sanctioning those monsters. It is a hallucinatory system, a generalized aberration I thought I could best express it in fantastical register.

The product of a powerful original prose writer, a rara avis in post communist Romanian literature, The Ghost in the Mill is not only a first-rate literary event of the current year, but also one of the most convincingly poignant works of fiction addressing the topic of local communism to be published during the last decade.

Romanian author Doina Ruști’s novel The Ghost in the Mill (2008), writer Manuel Rivas, The Crpenten’s Pencil (1998) in wich the ghost of an artist executed by Falangist militia haunts a pencil (and its future user).

Doina Ruști has the vocation of a builder constructor, the capacity to build a meaningful narrative and exuberant imagination. If asked to recommend certain characters, pages or sequences from the second part of The Ghost in the Mill, I wouldn't know which to mention first, because almost all of them are remarkable. There is no doubt that it would be far too less if I only mentioned Săndina, the old cooperative worker, that lurks around the deserted mill and writes, without anybody suspecting her, informative notes for the Secret Police, the grotesque Gabriel Neicușoru, the unctuos physicist from the Phenomena Institute, or the terrifying scene where the mill is demolished." 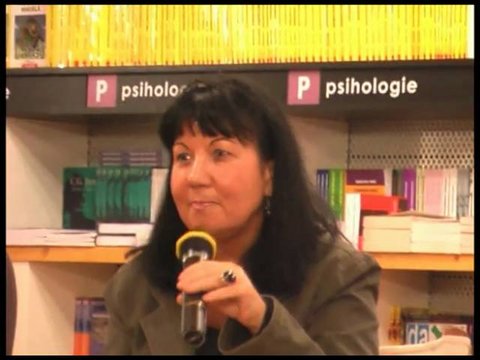 Doina Rusti - The Ghost in the Mill